Now, the Outer Circle crosses the railway bridge and dives down into the older part of Stechford. On the right is the site of the Parkinson Cowan gas cooker factory. This site is now a retail park. On the left is the site the Stechford “up line” good yards. This was used by Cartwright’s timber for storage and is now partly occupied by a Jewson’s yard and a small housing estate. On the edge of what was the goods yard is a row of terraced houses facing Northcote Road which may at one time have been railway houses. They are almost identical to the nine houses on the left as we descend from the station bridge.

At the foot of the bridge here the Outer Circle at one time was one-way. The traffic heading the opposite direction went around the triangular one-way system bordered by Station Road, Flaxley Road and Iron Lane. After years lying derelict, the land within the triangle looks as if it is at long last under development. In fact, a recent visit has confirmed that work is taking place at the moment to create a new roundabout, a new bridge over the River Cole and a dual carriageway. The cost will be £5.5 million and one million of that has come from Bus lane fines!

On the left is Albert Road which has many old terraced houses and is regarded as the heart of what is termed “Stechford Village”.

The name Stechford has long been up for debate as it came from a number of sources. It seems that the most recent name “Stechford” was adopted by the London North Western Railway for their station as an adaptation of Stycheford. This may have been a ford over the Styche, a triburary of the Cole, or from the ancient English word “stachia” which meant a dam made up of wooden stakes. The earliest record of “Stycheforde” appears in 1345.

At the new roundabout that is being built is Flaxley Road which runs east for about a mile towards Lea Hall, it was once known as Flaxley Lane. Apparently the “rivers of blood speech” politician Enoch Powell was born in Flaxley Lane near to the junction of Station Road in Stechford in 1912.

At the junction, on the right, at one time stood a pub called the Bulls Head. By the 1970s it had been renamed The Manor Tavern, and by the turn of the century it had been demolished. The site became a car-wash & tyre depot, and now houses are being built there. At one time the land alongside the River Cole was used as an over-wintering ground for fairground operators. 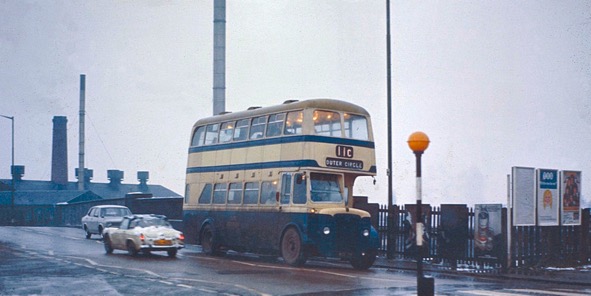 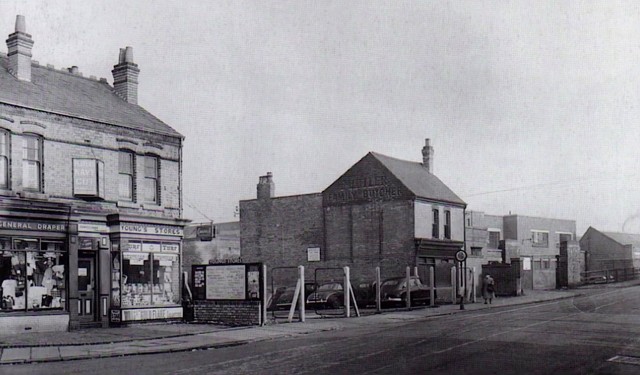 These are the shops that stood at the foot of the railway bridge at Stechford, on the west side of the road. the entrance to the gas cooker factory is on the right

This is at roughly the same place as the previous photograph of the foot of Stechford railway bridge. This is the retail park taken in March 2019. (Minced cow in a bun anyone?) 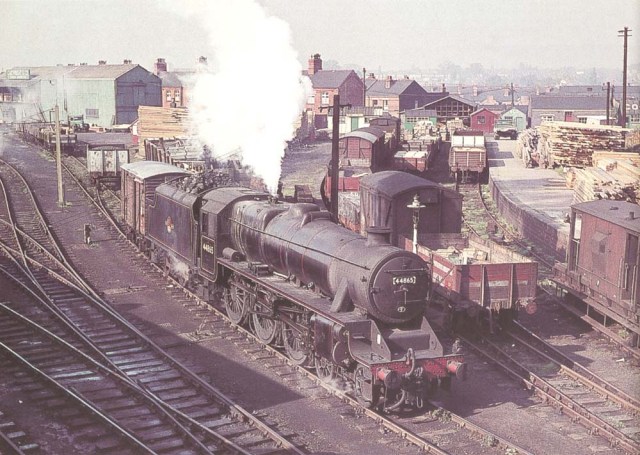 The “up” side goods yard at Stechford in 1961, ex-LMS 44865 is on shunting duties. The yard was used by Cartwright Timber – there are stacks of it all over the place. There were also a number of coal merchants that used the yard as well (you can just make out the first two letters of CO-OP on the shed on the right). The houses behind the steam are in Northcote Road. 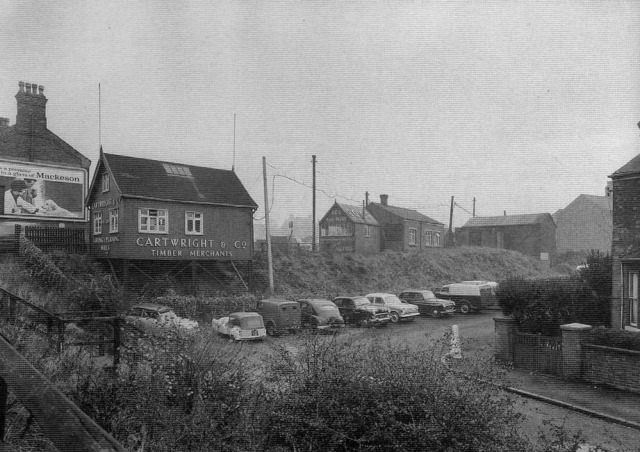 Stechford goods yard from the road down from the railway bridge in 1961. Old Station Road and Northcote Road are on the right. (Spot the Bond 3-wheeler!)

Looking up from the north side of the railway bridge at Stechford. Jewson have taken over what was the Cartwrights yard and the “up” goods yard. Northcote Road is on the right. March 2017

This is Northcote Road and the terrace of houses that back onto what was the goods yard. I suspect that these were built by the London & North Western Railway in the 1850s for railway staff. There is a row of nine identical ones on Station Road. Taken in 2019. 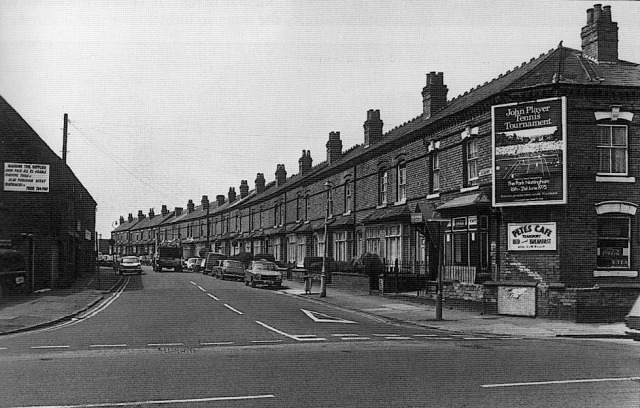 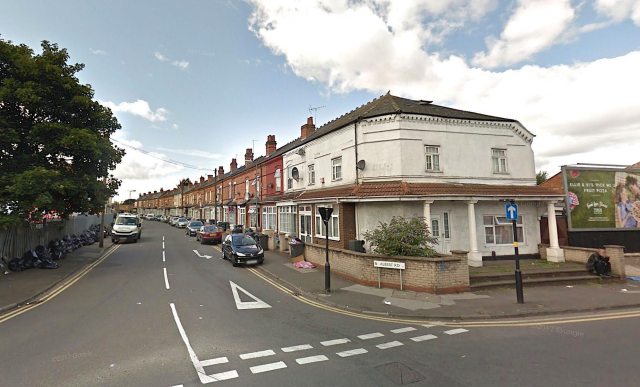 Pete’s Cafe has gone and the building at the corner of Albert Road & Station Road Stechford has become a house (with traditional pillars!) – c2017 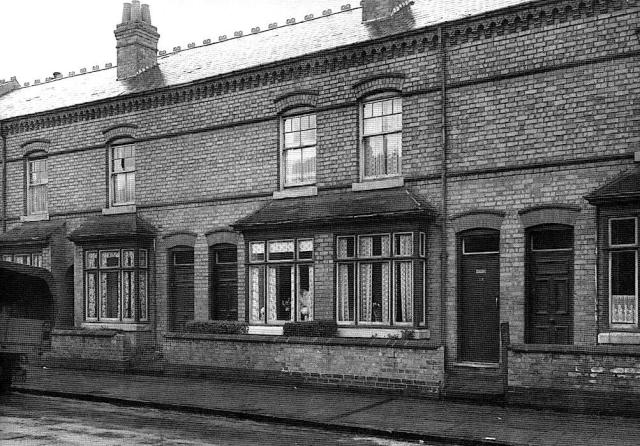 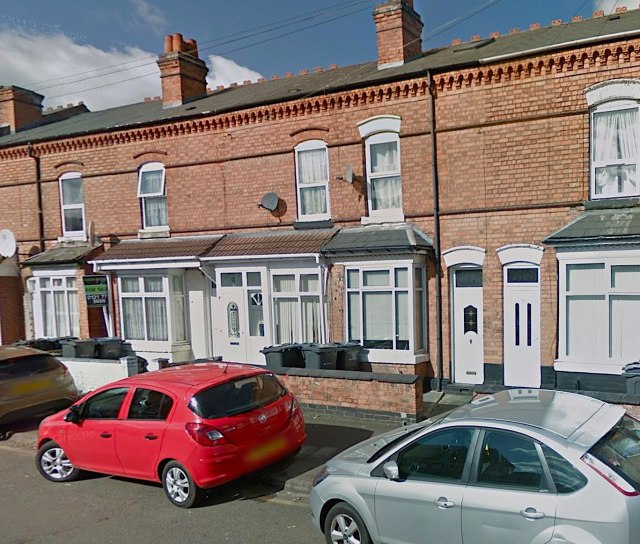 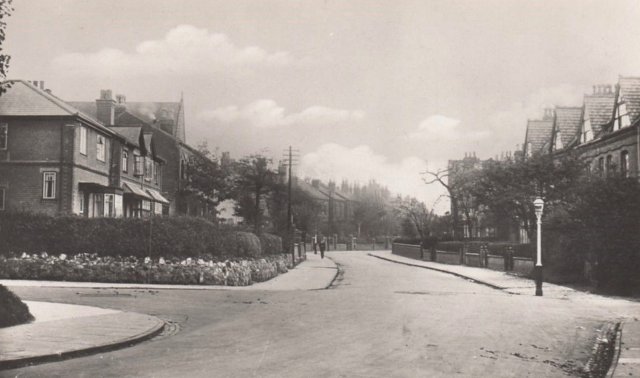 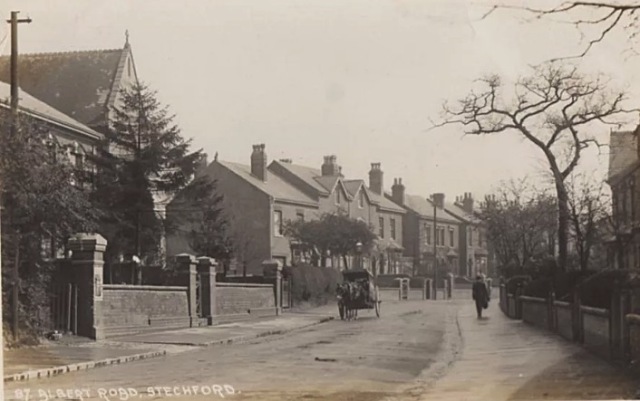 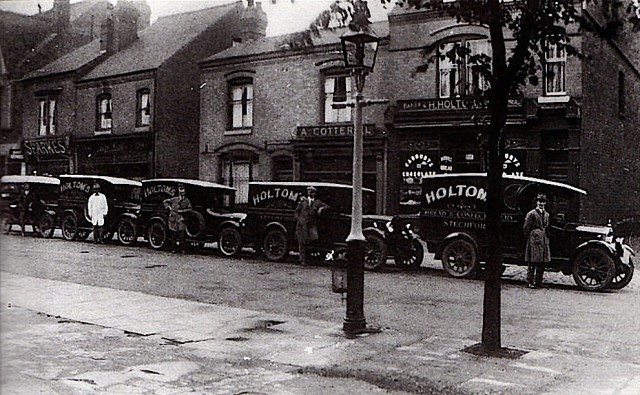 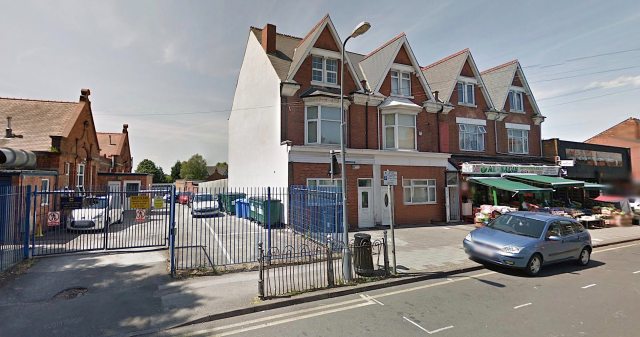 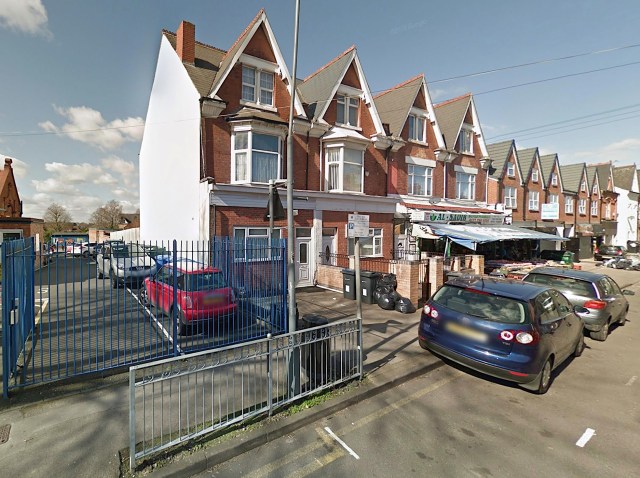 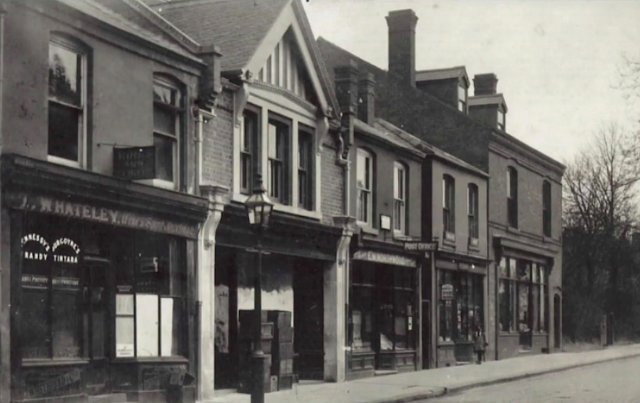 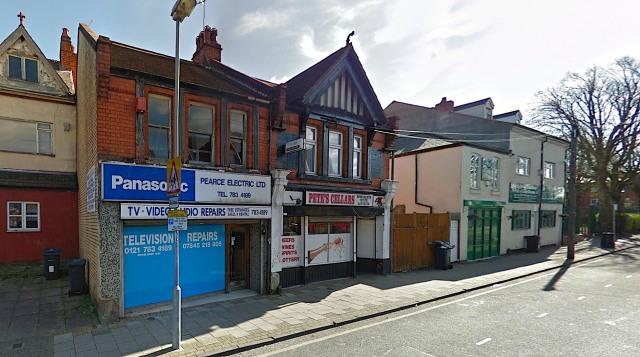 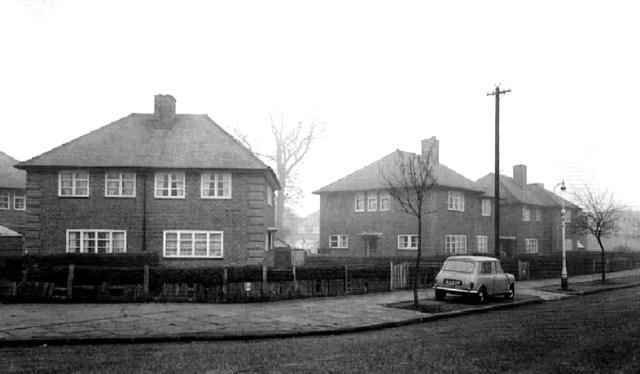 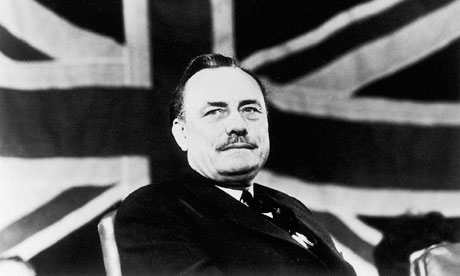 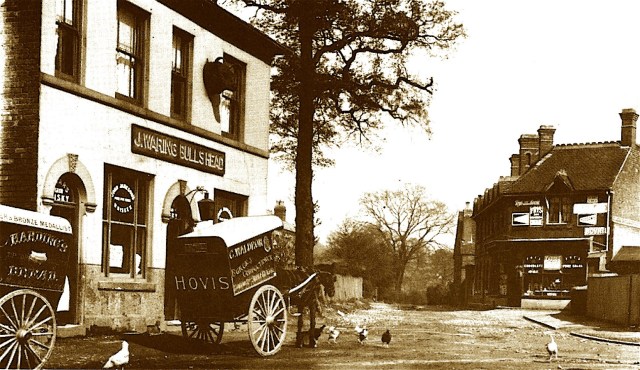 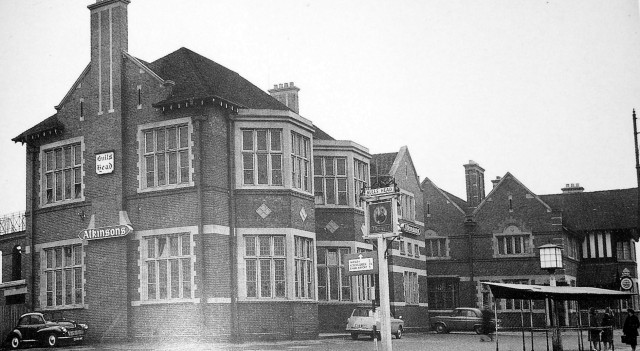 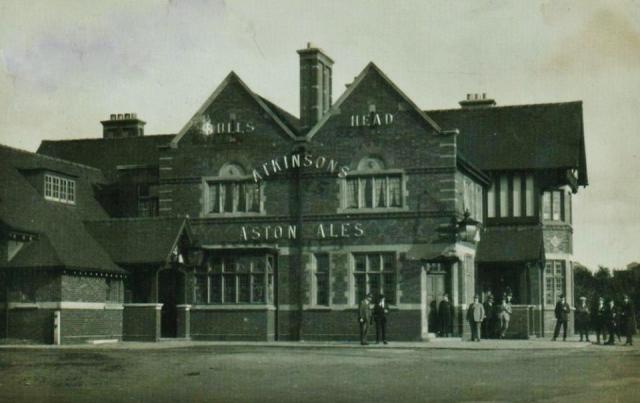 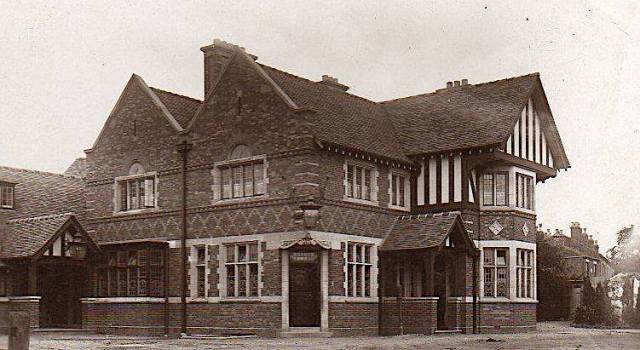 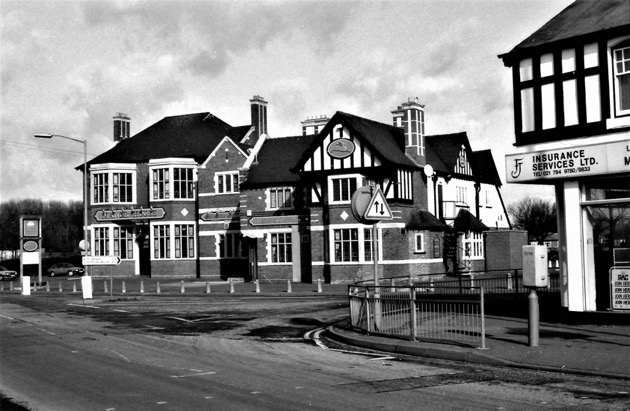 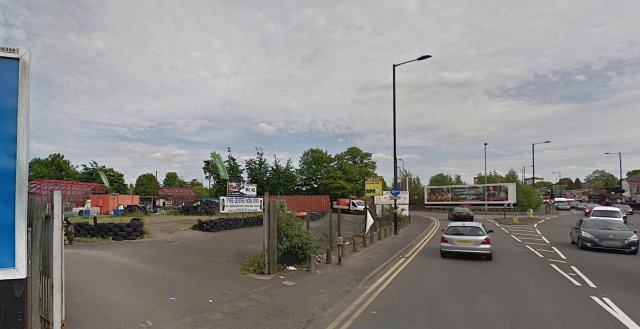 The Bulls Head site looking south as a tyre depot – 2019

The Bulls Head Stechford site as a tyre depot and car wash – 2019. New houses have already started being built on the far end of the site 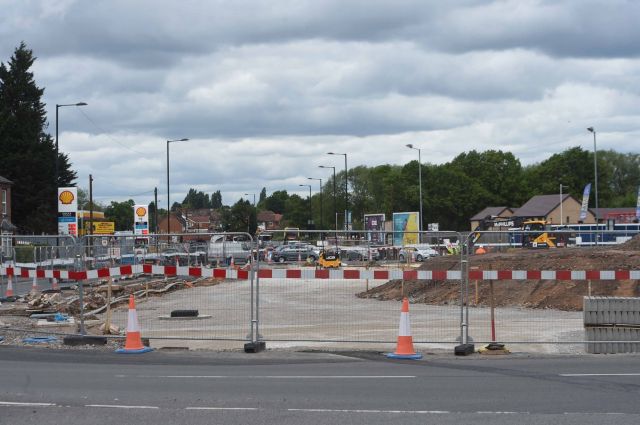